Four fish later, we are continuing to build our farm here at our home in the armpit of Tampa Bay. I call it the armpit because we are nestled right under the arm that comes off Tampa Bay. (Though Comedy Central has been known to call the arm a “penis,” mostly during election season, but I shudder to think what that means for where we are nestled in that case. Therefore I shall call it “the arm.”)

We’re in the pit.

We almost ended up with a “Joseph,” “Joe,” and “Joey,” for some reason, the boys are really stuck on the many variations of Joe on this one. The black fish is “Joe,” who gave us a scare the other day, the same day I realized I had accidentally thrown away the receipt. You see, as long as you have the receipt and the poor sad dead fishbody, you can do a return! Which is where I thought we were headed with this. Because when a fish goes missing, that can’t be good.

So Joe went missing. Which is hard to do considering the fish tank is only 10 gallons. But we couldn’t find him anywhere for about a day, all morning, and all night. Vanished into thin air. Perhaps in the pineapple under the sea. Who knows. The other fish continued to frolic as per the norm, eating each others already-been-chewed fish food among “other things,” yet Joe was nowhere to be found. Evan thought perhaps one of the cats got up on the dresser and Catherine Zeta Jones-ed her way through the obstacles on the dresser to daintily paw out a fish, but nothing was moved and there was no water anywhere, so that would have been the cleanest fish heist I had ever witnessed. 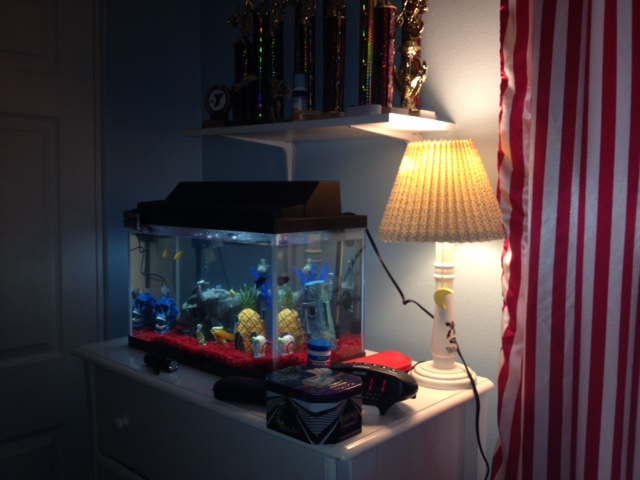 Is it possible? I shan’t think so.

I wasn’t so sure.

I remember the last time a cat in our household pulled off a fish heist and it was messy. I was about 14 and the tank was on the floor broken and fish parts were scattered everywhere. All fingers pointed to one guilty white cat. If I were the CSI of fish tanks and missing fish, I’d consider other possibilities. 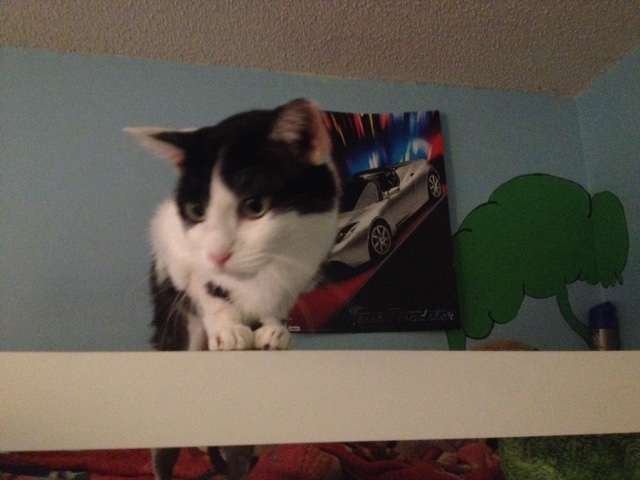 So after a day of wondering, and honestly, the growing grief (the first 24 hours are crucial!), the boys were beginning to panic, around breakfast time the next day, Joe came out from wherever he was for his daily pinch of fish food. So apparently Joe likes to hide. For long chunks of time in a row. 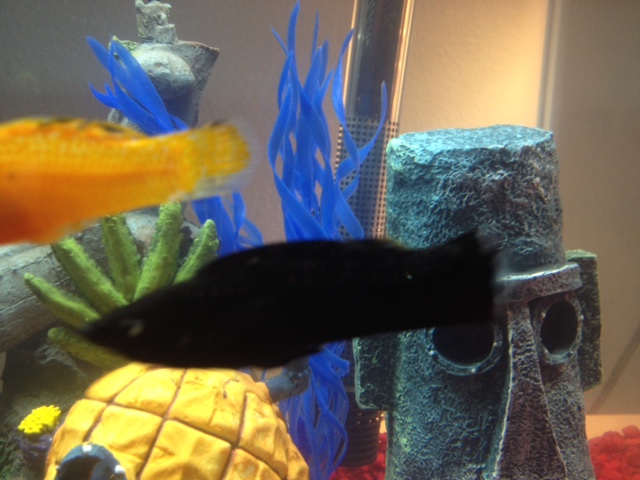 Joe Fish: Likes to hide for long periods of time and scare people

Thanks for the heart attack, Joe. I was afraid I was going to have to explain and console that one away this week and I don’t think I could have handled that one. (Plus I threw away the receipt!)

Besides, the fish tank guy at the store gave them all at least a year (and up to 5!) So hopefully we have some time. Which could be worse as we get to know our fish a little more (along with their habits) and bond with them. But we’ll see how this goes.