We went in for one, we came out with two. 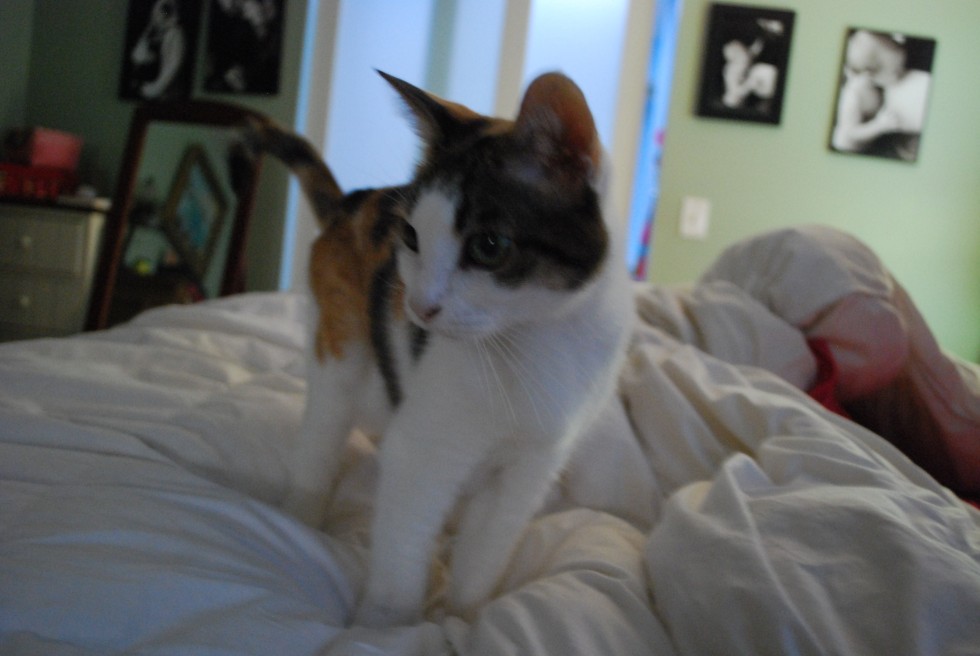 Last weekend, before my massive tantrum, I had promised my little guy we’d think about getting a cat. We’ve been talking about it for a while and he is a cat guy, you can just tell. He loves cats. I think they “get” him. Plus they do what I can’t seem to do very well and that’s calm him down.

It’s been a while since we’ve had one, my last kitty kitty was named Putty (like Putty Tat) and she was very old and quirky. My husband said she looked like she got hit in the face with a bag of nickels but that’s not nice. She had a bum eye and she was not a lap cat at ALL, despite all my attempts to “hold her every day until she got used to it” in which I’d just end up with shredded scratched up arms as she launched off of me.

She did love me though, I could tell, even through her permanent scowl. Also she loved french fries but she refused to eat them off the floor, they had to be on a napkin. Oh, excuse me. Dainty aren’t we. 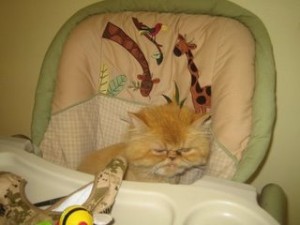 Toward the end of Putty’s life, she had high blood pressure which literally blew out her eye one day and we had to have it removed, a horrible thing to walk in to by the way, I don’t even want to describe it. But she lived another two years after that and passed away quietly under the train table. I still have her ashes, I am waiting to one day make a garden and sprinkle her ashes in there. I am a terrible gardener and so I am hoping that one day I will make a garden that will actually keep, so she doesn’t end up in a pile of dead plants. I love her too much for that. So right now she’s in the corner of my bedroom which sounds weird.

So fast forward to this past weekend when unbeknownst to the kids, my husband ran out to grab a cat carrier and snuck it into the back of the mom van. I loaded them up on a bright Saturday morn and was not telling them where they were going.

We pulled into the Humane Society parking lot, which we have visited many times “just to look and say hi” and I let the “cat out of the bag” so to speak. (heh.)

We wandered around inside for a while, I thought it would be possible we end up with a kitten, but I really was hoping that we would “fall in love.” You can’t time these things out and so I wasn’t sure what would happen.

As we went by a pen filled with kitties, I bent down to pet one and the kids bent down with me and I said hello to the woman who was inside the pen to keep the kitties company. We began to talk about the different kitties and how she knew a lot of their backstories and I said, “It must be hard to hear that,” and she said yes it is. She became our buddy and took us to a few of the pens where she thought the kitties might be compatible with my raucous boys.

We didn’t bond with any at that point so we went to a room filled with kitties inside of the building and there we spotted Bebe. Bebe was a black and white kitty with 1/2 an ear missing and a long skinny, wiry tail. She looked a little on the scrawny side and was kind of funny looking to me but she took to Aidan immediately. We left the room and Bebe just sat at the door, which was a window, staring out at us.

We went across the hall to see some other kitties who were separated and in individual crates. I looked at all their names, ages, and descriptions. Some of them were described as not getting along with dogs, or needing to be with a family with older children, and then I saw her. Lady Bug.

The photo on her paper had this teeny tiny face with giant round eyes that hypnotized me. I looked into the crate and she was sitting quietly all the way toward the back. After a few minutes of me saying “hi, kitty! aren’t you so pretty!” she came forward to meet me. Our cat buddy took her out of the crate for me and I put her on my lap and sat down and she started kneading my legs and purring and at that moment, I fell in love.

So now we were in trouble.

There is a kitty that is still sitting at the window across the hall waiting for Aidan to come back and I had just gone and done fell in love with a kitty of my own.

I texted my husband and the following exchange occurred:

Me: We are torn between two cats.

Him: We are about to have two cats, aren’t we.

Which was my cue to proceed.

And so Aidan, who was with me but obviously his heart was across the hall, went back to the room to pet his kitty who loved him.

I really believe that these two kitties chose us, and not the other way around. Sometimes you just can’t help who you fall in love with.

Also it turned out that it was BOGO day at the shelter. I like to call it “the buddy system,” where you can take home two kitties and you only pay one adoption fee (it sounds so much better that way), but I guess in the end it’s still a BOGO. So we got a BOGO at the animal shelter. It didn’t matter though because they would have still both come home with us.

Since we got here, Bebe has spent most of her time in Aidan’s bed, further solidifying my hunch that she really did fall for him. She hasn’t picked any other room to spend her time in. 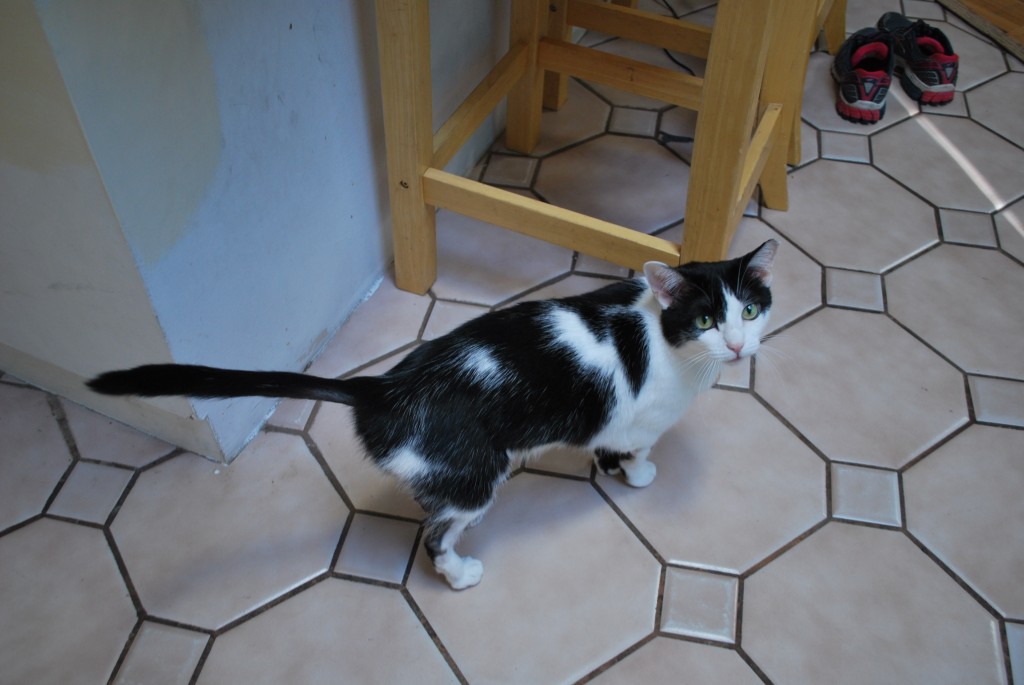 And Lady Bug is huddled under my covers right next to me as we speak. 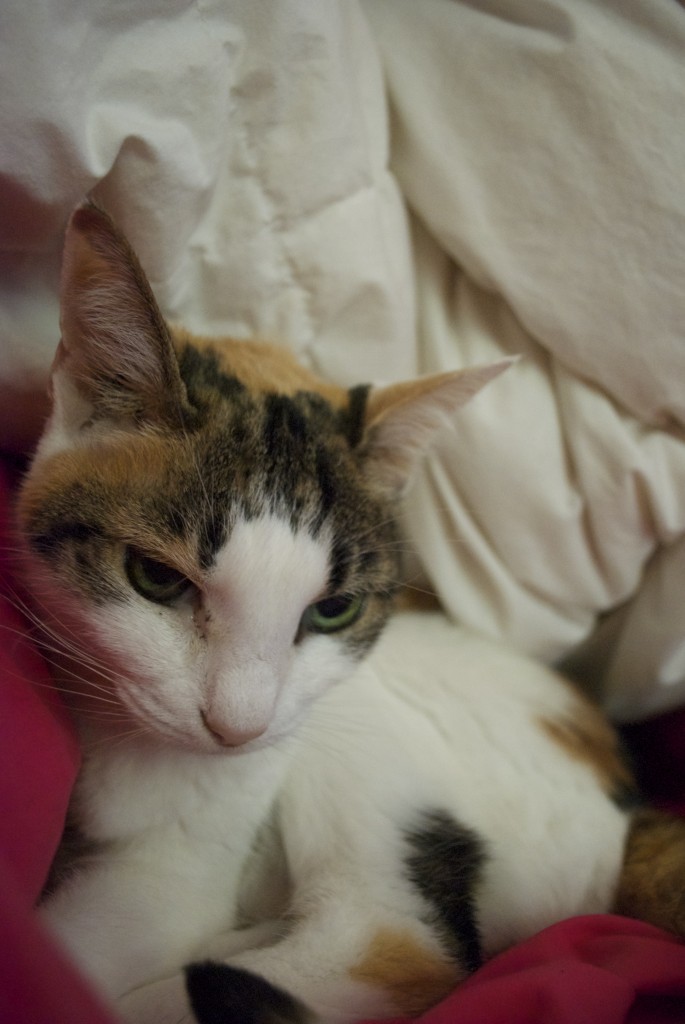 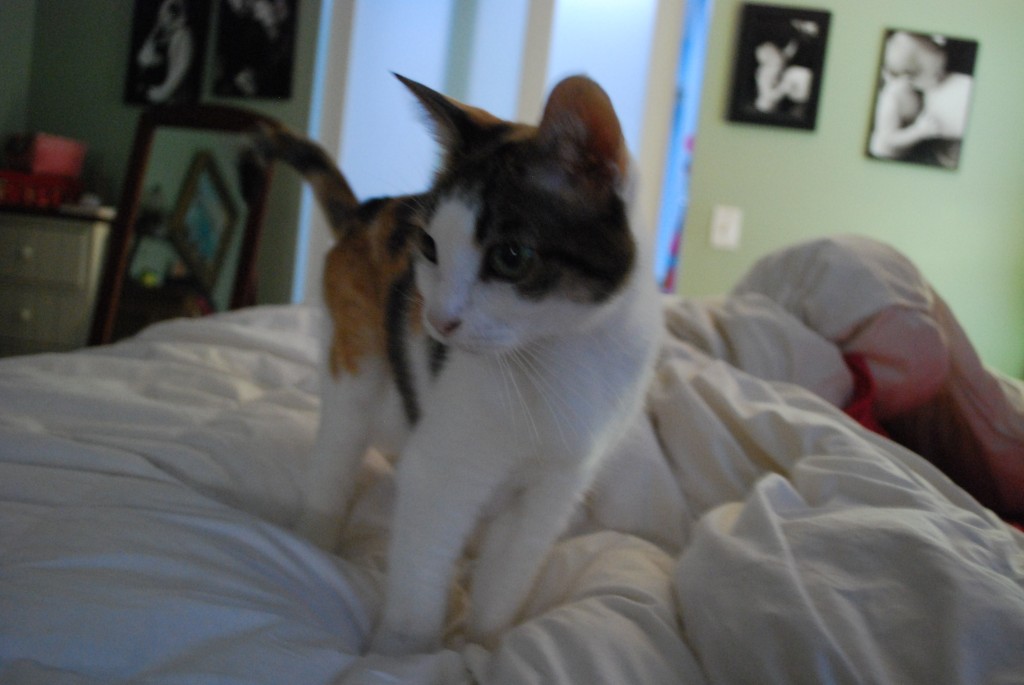 I was a titch concerned that it would be a farm here with two cats, a dog, two kids (and a husband).

But no. 7 souls on board is just perfect.